Traveling for Vacation or Business
Visit masstimes.org for options near work/school/travel

Catholic Devotions offer us the opportunity to grow closer in our relationship with Christ through specific practices of personal prayers. Here at Prince of Peace we offer several opportunities to participate in organized devotions. Learn about some of the devotions that others participate in here at the parish below.

School of the Cross is a gathering of spanish speaking men that intends to further the mission of the Church by giving life to communities of apostles that bear witness to the spirituality of the Cross of Jesus in the spiritual order and in the temporal order. Participants commit themselves to live in intimate union with the crucified heart of Jesus Christ Priest-Victim-Altar, to "be priests with their priests" and to specifically support the pastor himself in the fulfillment of his ministry. They are united by the conscience of being children of God, chosen by Jesus to participate in their mission in mutual help and to live the Gospel and the spirituality of the Cross to the heroism of love. School of the Cross participants gather in small groups.

This is a form of prayer that we pray on a rosary but with different prayers on each bead. St Faustina relayed a message about how praying this way would invite the Lord to bring forgiveness and great mercy to us at the hour of our death and that he would embrace and strengthen those who pray the chaplet each and every day of our lives.

Starting on Good Friday and for nine days leading up to Divine Mercy Sunday (Sunday after Easter), all who bring the souls of others to draw strength and refreshment and the grace they require to endure in life will receive all that they truly need. The Sunday after Easter has been designated Divine Mercy Sunday because the Church has honored the request that the Lord Jesus made through St. Faustina. It is a day set apart for all of us to approach God’s tender mercy and receive complete forgiveness of sin in the fountain that pours from Christ’s wounds.

The chaplet can be prayed during personal prayer time, as a family or within a group. If you would like to dive deeper into the study of Divine Mercy and the writings of St. Faustina, join this group that prays the Divine Mercy Chaplet, or begin praying today by accessing the novena, chaplet, and information here.

Our Lady of Guadalupe

The feast in honor of Our Lady of Guadalupe goes back to the 16th century. Chronicles of that period tell us the story. A poor Indian named Cuauhtlatohuac was baptized and given the name Juan Diego. He was a 57-year-old widower, and lived in a village near Mexico City. On Saturday morning, December 9, 1531, he was on his way to attend Mass in honor of Our Lady.

Juan was walking by a hill called Tepeyac when he heard beautiful music like the warbling of birds. A radiant cloud appeared, and within it stood an Indian maiden dressed like an Aztec princess. The lady spoke to him in his own language and sent him to the bishop of Mexico, a Franciscan named Juan de Zumarraga. The bishop was to build a chapel in the place where the lady appeared. Eventually the bishop told Juan to ask the lady give him a sign. About this same time Juan’s uncle became seriously ill. This led poor Juan to try to avoid the lady. Nevertheless the lady found Juan, assured him that his uncle would recover, and provided roses for Juan to carry to the bishop in his cape or tilma.

On December 12, when Juan Diego opened his tilma in the bishop’s presence, the roses fell to the ground, and the bishop sank to his knees. On the tilma where the roses had been appeared an image of Mary exactly as she had appeared at the hill of Tepeyac. People celebrate by praying a novena leading up to the Feast of Our Lady of Guadalupe which is a beautiful blend of Mexican culture and worship.

Join us on December 11th at 6:30pm for an evening of celebration!

Devotion to the Blessed Virgin as the "Rosa Mystica" is an ancient tradition in the Church, whereby Our Lady's exceeding virtue was poetically compared to the beauty and fragrance of the rose, which is widely considered to be the most beautiful of all flowers. The devotion was invigorated in these modern times after Mary allegedly appeared in Italy, in a series of apparitions to a local nurse named Pierina Gilli - from 1947-1991.

The Holy Virgin identified herself as "Mary, the Rosa Mystica, Mother of the Church" and delivered messages for those helping the mission of the church to live their vocations worthily, while calling on others to pray for them. It was a revelation, that in due time, proved to be highly prophetic in light of the ongoing clergy abuse scandal and the decline of religious vocations in the Church today. At Prince of Peace the Rosa Mystica devotion invites families to host a small statute and commit to a period of prayer together while the statue of Mary is in the home.

When we pray the rosary, we meditate on the events in Jesus’ life. Praying the rosary has been a tradition in the Church for a long time. What really matters is that this prayer is super powerful. St. Louis de Montfort said, ‘When the Holy Rosary is said well, it gives Jesus and Mary more glory and is more meritorious than any other prayer.’ Mary always leads us to her Son, and presents our needs before Him.

Prayer is about developing our relationship with God, and loving Him more, so it makes sense to get to know Him through the events of the life of Christ that we meditate on during the rosary. The rosary can be prayed as during personal prayer time, as a family or within a group. People gather after morning Mass to pray the rosary in church near the votive candles and shrine of the Blessed Mother.

Eucharistic Adoration is the prayerful practice of honoring the Eucharistic Presence of Christ. In a deeper sense, it involves "the contemplation of the Mystery of Christ truly present before us." During Eucharistic Adoration, we watch and wait, we remain silent in His Presence to open ourselves to His graces flowing from the Eucharist. Our Adoration chapel is open for those wishing to pray before the Blessed Sacrament 24 hours a day, except for the hours in which we are celebrating Mass together. Anyone is welcome to visit as they desire but we strongly encourage you to sign up for a regularly scheduled weekly commitment.

Every vocation is needed in the Church, whether to married life, consecrated or religious life, but priests in particular hold a very special place in the heart of the Church. Through Holy Orders, they are empowered to serve as a vessel of the Holy Spirit consecrating the bread and wine into the precious Body and Blood of Jesus Christ. In other words, without them, we wouldn’t have the Eucharist!

People are encouraged to host the Elijah cup in their homes for one week and make a daily commitment of prayer for vocations while hosting this. Our archdiocese and our country needs more priests, deacons and religious, and every prayer for them counts.

Join us through the Elijah Cup in praying for vocations to the priesthood, diaconate and religious life, and help bring new life into the heart of our Church for generations to come. This is a great thing for families, couples, or connect groups to gather around and pray for an increase of all vocations.

Stations of the Cross

The Stations of the Cross are a 14-step Catholic devotion that commemorates Jesus Christ's last day on Earth as a man. The 14 devotions, or stations, focus on specific events of His last day, beginning with His condemnation. The stations are commonly used as a mini pilgrimage as the individual moves from station to station. At each station, the individual recalls and meditates on a specific event from Christ's last day. Specific prayers are recited, then the individual moves to the next station until all 14 are complete. The Stations of the Cross are commonly found in churches as a series of 14 small icons or images. They can also appear in church yards arranged along paths.

The stations are most commonly prayed during Lent on Wednesdays and Fridays, and especially on Good Friday, the day of the year upon which the events actually occurred. Our stations are located inside the perimeter of our church. Each station (artwork panel) has a spot light. Anyone is welcome to pray the stations in the church or you can pray in the comforts of your home by utilizing resources and images.

This is a custom that is widespread in various places around the world in which the Stations of the Cross are acted out by participants who walk the way of the cross in order to more vividly recall the Lord’s passion and death. At our parish we have traditionally honored this custom on Good Friday with many of our Spanish speaking parishioners going to great lengths in order to help us enter the scene and draw closer to Jesus who gave himself so completely in order to win our salvation by paying so painful a price. 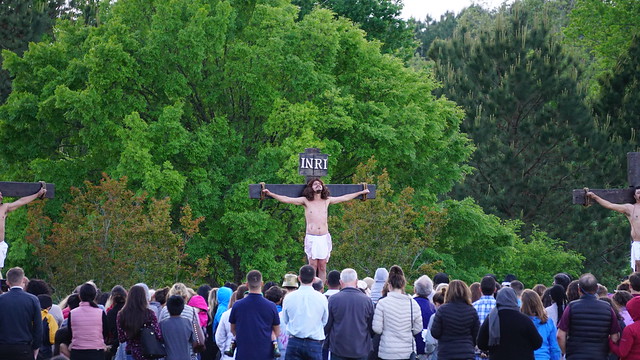